New Exhibit at A Place For The Arts

Today I am sitting at A Place For The Arts in Bancroft, Ontario. 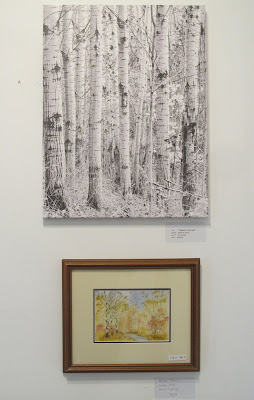 It was a fairly busy day, with many of the people who came in were there to see the new exhibit which was hung yesterday.

Next week the Christmas decorations will be set up along with the lights and ornaments hung on the trees.

This time my art is scattered throughout the Gallery, some on the main level and the others in various sections of the Annex on the upper level.

One of my paintings was placed in the Annex with another one which also featuring birch trees. 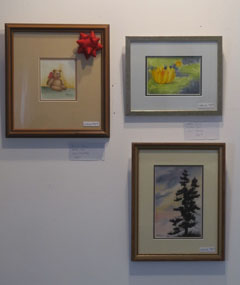 On the panel to the left of the entryway to the Annex was a small grouping of three of my paintings and the one of the teddy bear had a red bow placed on it to match the bow on the bear.

Another of my paintings was in the back section of the left Annex together with works by a couple of other artists.

On the main level my large painting was hung in a space by itself. 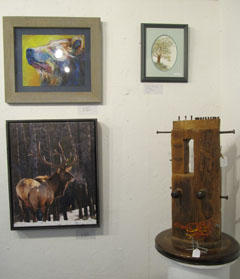 If you have a chance please, come out and enjoy the show. Gallery hours for November and December are 10:00 a.m. to 4:00 p.m. Wednesday through Sunday. 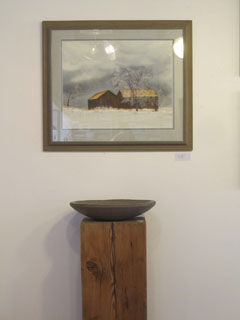 The End of the Elm Tree

Today Ron decided it was time to cut down the old elm tree that died earlier this year from Dutch Elm Disease.

The tree was over 100 years old when we purchased the property in 1978. 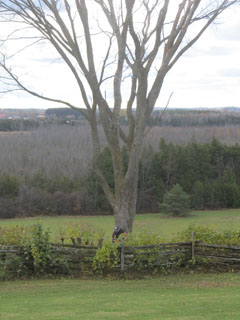 It continued to flourish and provide a look out post for the male North American Kestrel while his mate first nested under the eaves and then once we closed the hole, in the hawk box on the side of the house.

During the winter a wide variety of birds would pause in its branches to rest between trips to the feeders or be there in the morning waiting for me to fill the feeders.

Last year, in the early summer I was saddened to see the leaves on the western side of the tree wither and drop to the ground and it continued until by the fall the branches were completely bare.

In the spring only a few of the branches on the east side of the tree had leaves and by the summer they too, had withered and fallen to the ground leaving nothing but bare branches. 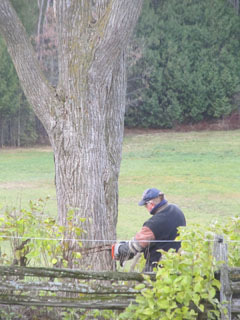 He first mowed the hay in the area where he was going to drop the tree to make it easier to cut the wood and load it onto the trailer.

Then he started by making the beginning cuts to the tree so it would fall where he wanted it to land.

It took some time to do as elm is a hardwood and this tree had a fairly wide base.

At this point I went down into the front field to take photographs of the elm as it would fall to the ground.

It didn't take very long for the once majestic tree to make its downward descent to the ground. 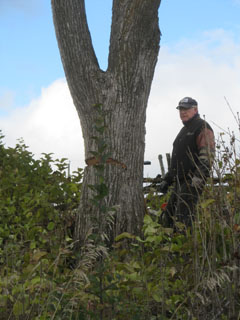 Now it was time to start the labour intensive work of cutting the branches into manageable lengths and loading them onto the trailer to be unloaded and then stacked along the fence line behind the barn to age for next year's firewood.

This will be our project for the rest of the day and probably continue until the end of the weekend.

But by that point we should also have the trunk cut up into manageable chunks and stacked to be split next year when it has dried.

My job while he is working on the larger pieces will be to clear the area of all the smaller branches and bundle them together for kindling. 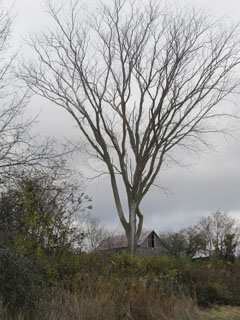 One thing I do know is that I am going to miss seeing the elm tree each time I look out the living room window. 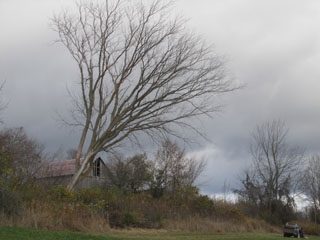 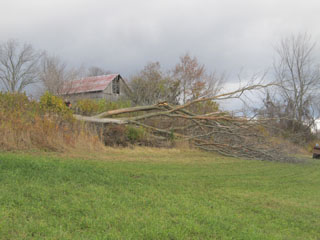 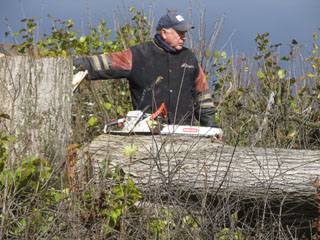 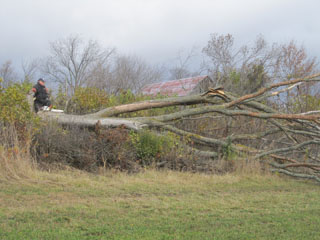 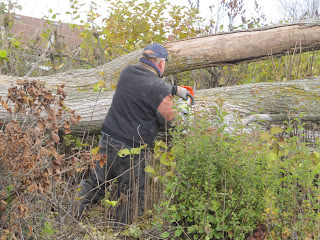 I was going to go to the Opening Night Celebration of the 28th Annual Christmas at Presqu’ile Art and Craft Show, but with the windstorm and bad weather the power to the park had been knocked out and the opening was cancelled. 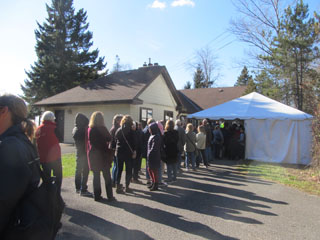 So we decided to go today to see the exhibit. 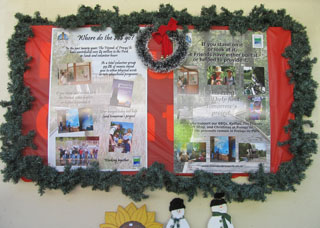 I had already been warned about how long the lines can be and to arrive early. 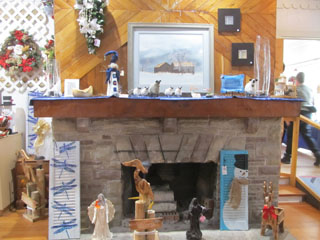 Ron of course, didn't believe that in the middle of the week it would be very busy, so we finally arrived around 11:30. 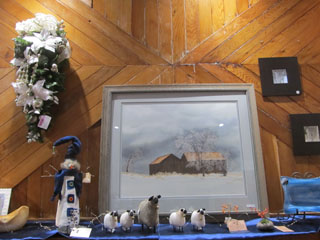 The line looks deceiving until you realize that once inside the tent the line snakes from front to back a couple of times so more people can be in under shelter in inclement weather. 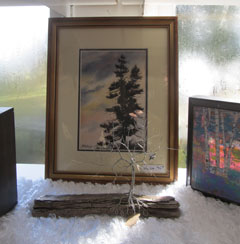 I stayed with Ron until he was inside the tent and then I went to sit on the benches near the entrance to give my leg a rest.

A little over an hour later we were able to get into the building.

The wait was well worth it.

There was a large selection of art in watercolour, oils, mixed media and acrylic. Sculptures could be found made of clay, wood, wire and stone. 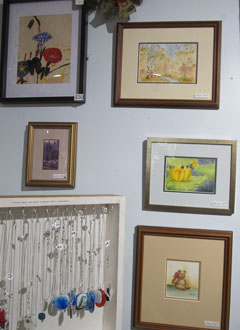 There was a variety of handmade Christmas decorations, jewellery, stained glass, quilts, as well as maple syrup, chocolates, and other edibles, just to name a few things.

I have updated the Buckhorn Artists' Group blog with a listing of shows some of the various artists in the Group are exhibiting their work in during the month of November.

If you get a chance come out and visit them at one or all of the shows.
Posted by S. Sydney at 2:49 PM No comments:

This is a listing of confirmed shows that I will be exhibiting my artwork at this year and into next year. I will update the list as more shows are added.

I look forward to seeing you at some of these shows.
Posted by S. Sydney at 6:43 PM No comments: