This is a drawing I had started earlier this month (see posting on 05 August 2012) and since I had some time while I was waiting to meet my husband for supper to celebrate our anniversary I decided I would add some more details.

Once I determined my light source I added some shading and added a few more details to the people in the sleigh. 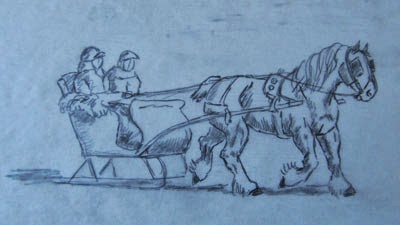 Tightened up the outline of the sleigh and lap rug as well as put some shadows on both and the main shadow beneath the sleigh and the horse to give the illusion that they were grounded on snow.

Next I started working on the horse making the harness more distinct, putting in some shading to give the horse roundness and indicate where the muscle masses are and darkening the hooves.

I will post this drawing at a later date once it has been completed.
Posted by S. Sydney at 10:44 PM No comments: