Today we opened early to accommodate the people who also came out for the annual yard sale held by Buckhorn Community Care in the front parking lot of St. Matthews Church.

Although it remained cool throughout the day it started off warmer 54F (12.2C) than yesterday in the morning but the temperature did not rise as much remaining a constant 56F (13.3C) throughout the afternoon with a steady rainfall until closing time. 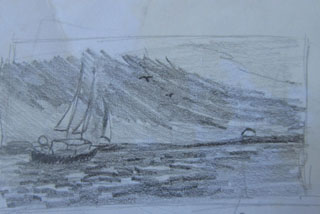 The one nice thing about the rain and cooler temperatures was that the attendance was up considerably and we had a steady stream of people coming through the show all day.

Because of this I didn't even try to paint, instead I worked on a couple more sketches of sailboats which could easily be left when I had to talk with our many visitors. 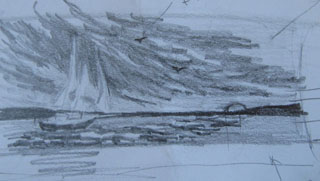 We hope you will be able to come out and visit the show either today or before it closes tomorrow.