Chemong Lake I and II - Two Works in Progress

It is always nice to go out on Chemong Lake as Ron enjoys the fishing with the lake having large and small mouth bass, muskie, walleye, yellow perch, black crappie, bluegill, pumpkinseed and carp.

I enjoy the ever changing seasons and the wide variety of subject matter to photograph, draw and paint and occasionally I will also throw a line into the water and go fishing.

It is a fairly shallow lake reaching a maximum depth of 21' (6.4m) and is about 1 mile (1.61km) wide and 9 miles (14.5km) long making it the largest of the Kawartha Lakes and it is a part if the well-known Trent-Severn Waterway system of locks and canals.

Chemong Lake is connected by narrow waterways to both Upper Buckhorn Lake and Pigeon Lake to make up what is known as the Tri-Lakes. 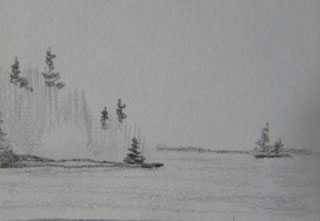 The J. A. Gifford Causeway between Bridgenorth and Ennismore in Selwyn Township separates the north and south ends of the lake.

Many years ago, before the Causeway was built it was not easy to travel across the 0.7 mile (1.1km) distance across the lake between the two hamlets.

It wasn't until the 1840's that a ferry service provided transportation to shorten the time it took to travel between Bridgenorth and Ennismore. Unfortunately this service was dropped after a few years due to the high cost to the local government to maintain.

Early attempts to construct a bridge ended in failure. Then in 1854 a delegation of residents made the request to county council to build a bridge. 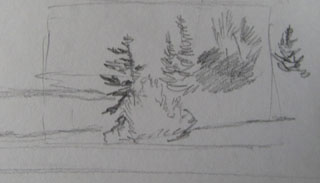 It was known as the world's longest floating bridge due to its almost 1 mile (1km) span.

For obvious reasons the bridge was referred to as the "Bridge of Terror" by the locals due to the middle section of the bridge often being underwater and some of it being carried away when the ice left the lake during the spring thaw.

In total there were three floating bridges built before the current Causeway (named after James Alfred Gifford, a long time Reeve of Ennismore and Warden of Peterborough County), was opened on 23 June 1949.

It was rebuilt in the early 1960’s and they are currently doing more maintenance to the structure.

I will post each of these sketches at a later date once I have completed the graphite pencil drawing or applied the ink.
Posted by S. Sydney at 4:40 PM No comments: