Last time I was working on this piece I was not happy with the placement of the nostrils. Rather than work on the painting and make a number of changes and having to erase and rework the drawing which could make a mess beyond being able to repair it, I reworked the nose on a piece of tracing paper.

At this stage I certainly didn't want to end up having to start the entire painting over from scratch. 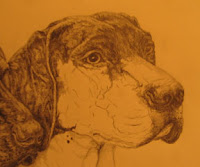 Finally I was pleased with the nose and transferred the drawing to the paper.

Once again I started with the nostrils, outlining the darkest lines in first as a guide and then worked the lighter areas gradually darkened them.

Once the nostrils were complete I started on the front flat part of the nose which by adding in the shading gives definition to the outer edges of the nostril.

Before I started on the upper part of the nose I lightly added a layer of graphite down the bridge of the nose to set the shape as well as at the base of the nasal bone just above the depression to use as a marker. 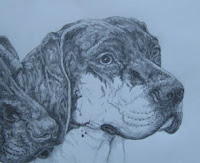 Working below the nose I shaded in the upper lip and lightly indicated the whiskers, which show as the small dots on the flew (upper lip).

Going back to the stop I worked down the bridge of the nose and put the shadows in for the depression under the bottom of the nasal bone.I then completed the upper part of the nose, added more shadows to the side of the nose and beneath it.

The dotted lines of the whiskers were put in and a little more shading was put on the muzzle with curved lines to create the illusion of roundness. Then the upper lip was darkened and the edge of the lips were given more shape and shadows until they were completed.

The jaw line was given a little more definition and the shadows in front of the ear were strengthened. The top edge of the jaw was filled in as was the area below the eye and along the sharp edge of the cheek.