This is the second technique we learned called a dirty pour in the Pour Your Heart Out workshop with Valerie Kent at the Cavan Art Gallery.

In a large cup we mixed white paint with the same amount of Floetrol mixing it well.

With the three primary colours I added water to thin it slightly and without stirring any more I added 1 drop of silicone to the bright red paint.  To the teal paint I added 2 drops of silicone and three drops of silicone were added to the Copenhagen blue.

With the black only a small amount of water was added and the last colour mixed in a small cup was the gold paint with an equal amount of Floetrol. 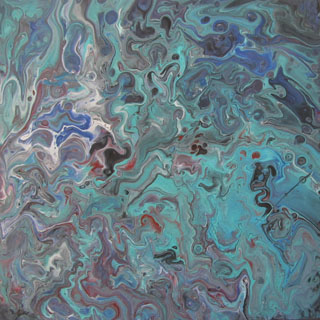 With a Popsicle stick the paint mix was stirred no more than twice in an "S" shape.

The canvas was placed over the top of the cup and were flipped over and set on the table.

When the paint started to ooze out from under the cup, the cup was carefully lifted off the canvas. The paint was then rolled around on the canvas until the top and sides were covered and then set aside to dry. 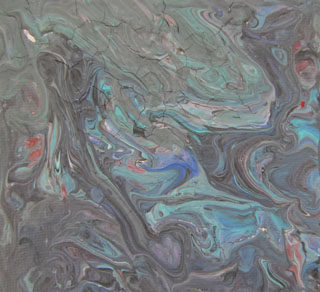 Since there was some "run off" paint left I poured it onto a small canvas and then scraped any remaining paint left in the large cup onto the canvas as well and rolled the paint around until the top and sides were covered.

This one was also set aside to dry.