At the barn where my friend Joanne boards her horses over the winter they had a couple of thoroughbred foals born early in the New Year. 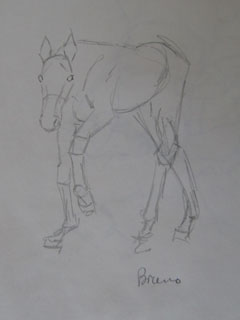 It was an unexpected treat to have two foals to sketch at this time of the year while I was waiting for Joanne to get her horse ready for her riding lesson.

Both of them were colts and born only four days apart and had the same sire; but they were as different in their personalities and actions as they were in their colouration.

I did a sketch of each of the foals while they were in the box stalls with their dams. 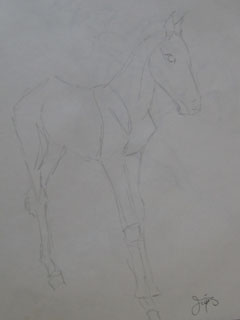 After the riding lesson, while Joanne was putting Fiona away I went back down to their adjoining stalls and studied the differences between the two foals.

Bruno was a bright bay without any white markings. The other was a rich red chestnut with a lot of chrome, four long white stockings, one up over the knee, called Jimmy.

Just as we were getting ready to leave the stable for the night the owners of the foals came in together. They were going to turn the mares and foals out into the covered arena for a little while to give the foals a chance to stretch their legs.

We decided to stay and watch.

Bruno went right out into the arena after his dam with no hesitation, while Jimmy didn't want to leave the stall and had to be coaxed.

Bruno stood quietly surveying the large open area of the arena, his ears pointed forward until his mother lay down to roll. Suddenly he burst into action, bucking and kicking on his long spindly legs. 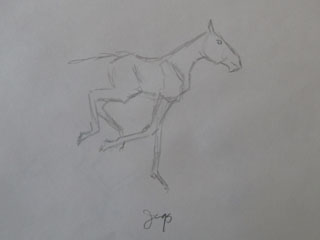 Jimmy once in the arena watched Bruno's antics and decided to join in and took off as fast as his slightly wobbly legs would carry him and almost fell making a sharp turn but managed to stay upright.

Before long it was time for them to return to their stalls for the night.

I will post each of these sketches at a later date once I have completed the outline drawing.
Posted by S. Sydney at 9:42 PM No comments: