Today was a beautiful, sunny day with a nice breeze blowing and the temperature went up to 82F (27.8C) with the humidity making it feel like 89F (31.7C). It was a wonderful day to go out on the lake with the canoe.

We originally had planned to go to Coon Lake up near Apsley, but as we were going up 28 Highway through Burleigh Falls we decided on Lovesick Lake instead. We hadn't been on that lake in over 20 years and we would be out on the water sooner, especially since there was to be a thunderstorm later in the day.

Burleigh Falls Lock 28 which allows access between Stoney and Lovesick Lakes has a Parks Canada public boat launch and parking available so it was an ideal place for us to stop and enter Lovesick Lake. 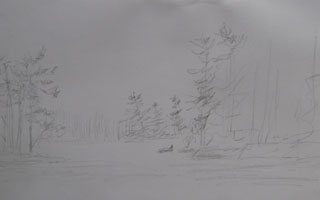 We left the boat launch and went across to the far side of the channel markers by Cut Island and stayed outside of them as we passed Ruba Island and followed them as far as the inlet on Richards Island where we backtracked and went up the shallow chancel between Richards, Taylors and Beaver Islands.

Once we were past Taylors Island we eased left and took the scenic route and went all the way around Marshall Island and saw some of the opposite side of Taylors Island before heading back down through the same shallow channel where we would let the current carry us back to the Lock. 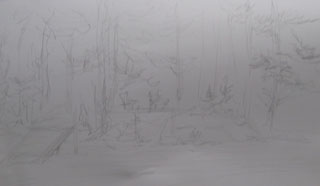 The lake has a maximum depth of 82' (25m) but there are many shallow areas with submerged trees and large rock shelves, which provides wonderful fishing spots for the many game fish including: large and small mouth bass, muskie, walleye, perch, bluegill and pumpkinseed sunfish, black crappie and carp.

Ron enjoyed himself and caught two large mouth bass and two walleye, all of which were quickly returned live to the lake. He also had numerous fish that he almost landed but got away just shy of the canoe. 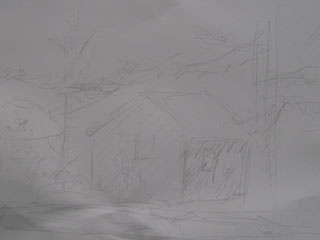 As we came out of the channel we passed close to Porters Island and stayed fairly close to shore until we had to cross the between the channel markers making sure there were no boats coming toward us in either direction and returned to the boat launch.

Perhaps next time we go to Lovesick Lake we will follow the shore on the opposite side of the channel markers and follow the shoreline into Lower Buckhorn Lake and Deer Bay.

I will post each of these sketches at a later date once I have gone over them with pen and ink.

Thank you for looking at my artwork.
Posted by S. Sydney at 1:43 AM No comments: