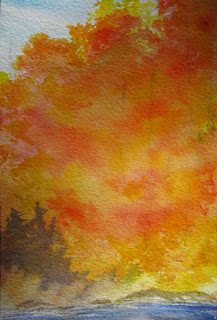 Today was another snow day; we had four inches more added on top of the six inches that were already on the ground from the storm that went through earlier this week.

I decided that I would work on two autumn scenes, since it is my favourite time of the year and I really didn't want to paint a snow scene.

It was early morning and the mist was just being burnt off by the morning sun. 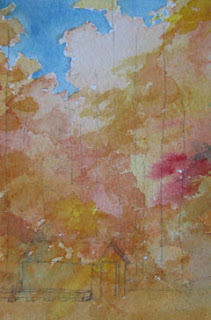 I painted in the water and some of the shoreline rocks and lifted a little more of this rising mist. Then I indicated where the taller foreground evergreens should be placed.

For the second painting (see posting 24 August 12) I drew in the boathouse that was on the Magnetawan River which had such beautiful autumn colours on the shore and the distant hills. I also put in the trunks of the evergreen trees that are in the foreground.

I will post these paintings at a later date once they have been completed.
Posted by S. Sydney at 8:55 PM No comments: