After doing a couple of sketches of maple trees yesterday I thought I would like to do the same with birch trees today. 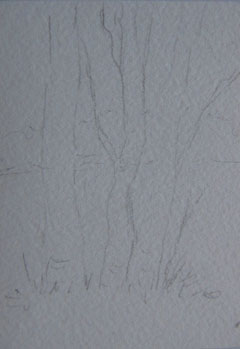 Once again I started in the bottom field near the Snelgrove Brook, this time a little closer to the centre of the fence line, where there are a number of full grown birch trees.

I sketched one of the sections with three birch trees where there had at one time been five birches. The two missing ones were lost to a beaver cutting it down and only the stump remains.

The other was blown over in a wind storm last year and the upended roots remain and most of the rest of the tree was harvested by the beavers. 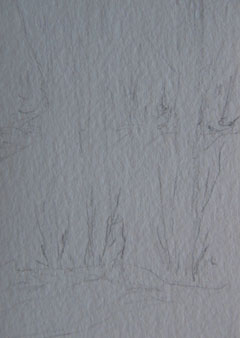 Once this sketch was completed I went into the sugar bush which is on the north east end of the property and found some birch trees along the main trail through woodlot.

These ones are younger and thinner trees due to them having to compete with the larger maple trees for sunlight in this 4 acre (1.6ha) forest.

It didn't take long for me to do this sketch.

As I continued through the sugar bush on my way back to the house I noted that even here the trees are not immune to the raging winds as throughout the woods there were a number of old maples that were torn up by the roots that will have to be cut up for firewood over the coming winter.
Posted by S. Sydney at 8:11 PM No comments: