What's New? - A Work in Progress

We were very fortunate that the rain held off yesterday until 8pm and it continued to rain throughout the night including having a major thunderstorm at 2am which lasted for almost two hours. The rain finally ended around 6am and as I headed for the show at Lockside Trading Company it was cloudy and looked as though it would start to rain at any moment.

It didn't take as long to set everything up again as I knew exactly what was being hung up on the grids which made things a lot easier.

With the overcast skies not too many people came out for the morning but as the day progressed the clouds disappeared and the sun came out bringing with it the crowds. 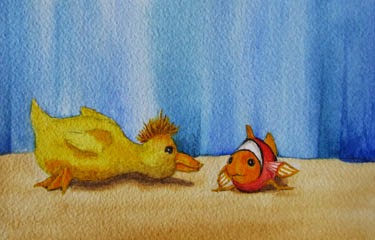 I did a little more work on this painting that I had started in one of the Still life classes at KAGS (see post on 27 March 2014).

I started by working on the curtains to give a little definition to the folds.

Next I darkened the shadows beneath the duck and then worked on getting the duck to look a little more round in shape.

I will post this painting again once the toy duck is completed.
Posted by S. Sydney at 11:59 AM No comments: