Philrick Star was a Standardbred mare by the grey stallion Futurity Chief out of Star Adios C, an Adios granddaughter. She was never raced, but did compete in western pleasure, trail and reining classes. 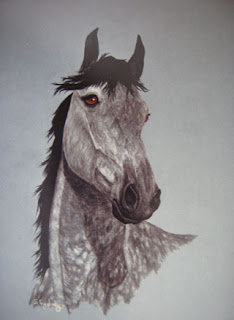 As a broodmare produced two colts, Star Holder by Title Holder who raced as a 3 year old and was later used as a field hunter.

Star Skipper by Kawartha Skipper who just before he was due to start his racing career as a 2 year old had an unfortunate accident which ended any chance of racing. When he recovered he became a favourite school horse at a summer camp.

Thank you for taking the time to visit my blog and enjoy the artwork.
Posted by S. Sydney at 8:45 AM No comments: