It was an interesting day at the art show, with a refreshing breeze blowing and the lack of humidity in the morning due to a much needed downpour of rain around 5:00a.m. this morning.

The skies however, remained overcast and as the morning progressed the wind increased along with the temperature 80F (26.7C) and the humidity 100F (37.8C) and then the rain came again in waves, of extremely heavy down pours and high winds, then eased slightly before another rainstorm came in, including two thunderstorms during the afternoon.

There were Meteorological Alerts issued by Environment Canada for tornado warnings, severe rainfall warnings and severe thunderstorm warnings in effect for the area. The power went out twice at the show, but no one complained about being in the dark for a short time and continued to enjoy the art work when the lights came back on.

I am not going to complain about the weather as we got the much needed rain which means tomorrow I will not be walking the dog on "crunchy" grass and no tornadoes touched down in the area. 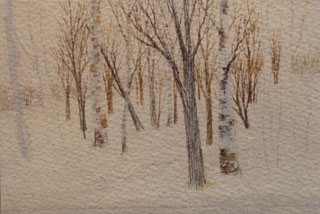 I put some shadow into the bottom of the painting using a pale mixture of French ultramarine blue and burnt sienna.

I would like to thank new collector Ms. Barbara Worthington of Mississauga, Ont. on her purchase of Birch Song 4 (see post on 03 June 2010).

I hope you will be able to come out and visit the show either today or before it closes tomorrow.
Posted by S. Sydney at 3:32 PM No comments: