Today we set up the display at the Peterborough Public Library for the Trent University, Canadian Studies Department, Art and Culture Tour. 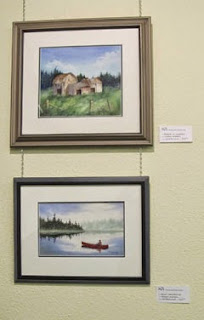 The Kawartha Artists Gallery and Studio had forty four works of art by twenty two of their members on display in the Auditorium of the Library.

It was a beautifully set up display, which was well worth seeing.

Unfortunately, of the 200 delegates who were to attend the tour less than ten were able to leave from the original start point to go the two blocks to our location.

And as far as I am concerned it is their loss and they should be ashamed of themselves for not taking the tour which was set up for their benefit. 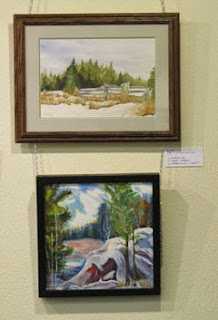 The artists who were at the exhibition had an enjoyable time and were pleased that a number of the general public came out to enjoy the display.

I worked on a number of pieces at the show and I will post them at a later date.
Posted by S. Sydney at 2:15 AM No comments: