Today I wanted to play with colour and what better way than to paint skies?

To keep the palette simple, I would use just three colours which were alizarin crimson, Antwerp blue and new gamboge. 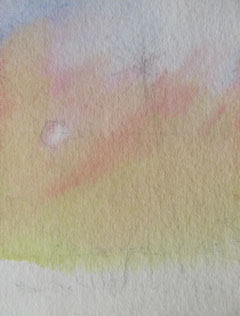 I made a puddle of each colour on my palette, so I could put the paint on quickly and not have to stop to mix color.

I wet the sky in the first painting being careful not to touch the sun.

Using the blue first, I brushed in the top quarter of the sky, this was followed by using the red into some areas of the blue and part way down the sky.

Lastly, I used the yellow and painted down to the top of the horizon line and then set this one away to dry.

With the next piece I wet the entire paper and as with the first painting I started at the top using the blue and brushed a small amount into the top leaving white areas for clouds, followed by putting the blue into the bottom of the painting for the reflection of the sky colours in the water. 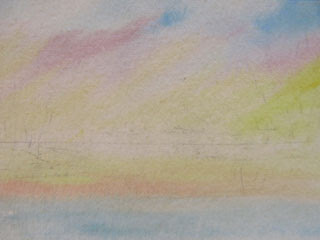 This was followed by using the red into the top third of the painting again leaving areas of white for the clouds and then putting some into the water just above the blue.

I set this one aside to dry. 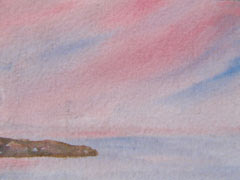 On this one I decided not to add the yellow. Instead, I put in the rocks in the foreground using burnt sienna, the red and the blue. before setting it aside to dry.

I will post each of these paintings at a later date as more work on them is completed.

Thank you for taking the time to visit my blog and enjoy the artwork.
Posted by S. Sydney at 3:18 PM No comments: