Overnight we had freezing fog and I woke up to see everything coated in white ice crystals.

For the third day we are under a Meteorological Alert issued for the area of a winter snow storm warning with up to 9" (22.9cm) of heavy, wet snow and a heavy rain warning together with possible flooding. With the sun making an appearance in the late afternoon the high reached 41F (5C). 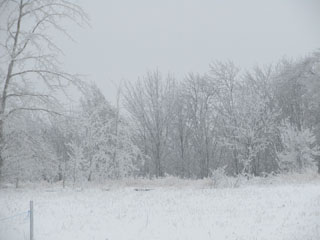 After doing the barn chores I went for a walk around the track and took a number of photographs of the ice covered trees.

I thought I would do a couple of sketches of streams with winter trees coated with ice much like the scenes I had on the property. 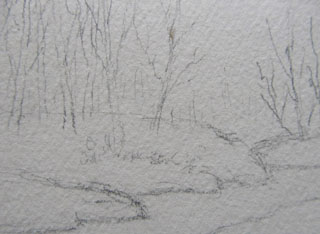 For my first drawing I put in the river and then added in the snow covered banks. From there I added some grasses and growies onto the river banks coming up out of the snow.

Next I went in and put the tree trunks and branches along the shore and added them faintly into the distant hills. For my second drawing I wanted to do one of the wetland at the S bend at the bottom of the property, where there are cattails growing.

I put in the stream followed by the snow covered banks against the water. Next I added the trees onto the land and some of the dead, dried cattails at the edge of the wetland.
Posted by S. Sydney at 12:13 AM No comments: