Sunrise on the Lake - A Work in Progress

This is a painting I had started back in April (see post on 20 April 10) when I was working on my submission for the "Art of the Turtle" which was a fund raiser for the Kawartha Turtle Trauma Centre.

This is the first painting I started which looked more like a lake than a pond for the turtle so I restarted that painting and set this one aside.

I have added more colour into the sky and worked on the rocks and water. I haven't decided whether I am going to add a sailboat into the painting or some reeds and a heron. So it is back to the drawing board and making the sketches to see which would look better.

I will post this painting once I have added the main figures into the painting. 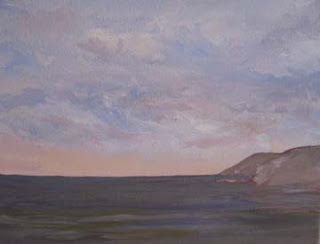 The dog show is proving to be very interesting and I have many sketches for working on during the winter months. I also have a number of commissions for dog portraits resulting from the Eastern Ontario Labrador Breeders Association 10th Anniversary Specialty Show and the Limestone Kennel Club Show.

I would like to thank new collector Marita A. Boyd of Ottawa, Ont. on her purchase of Run Appaloosa Run (see post on 04 February 2010).

Also congratulations to Al and Joanne Fernall of Norwood, Ont. for selecting The Hunter (see post on 26 April 2010) as an addition to their art collection. If you would like to see some of their wonderful Labs follow the link to Devonsleigh Kennels. That is where my daughter got her dog Can. Ch. Shanbro's Charisma affectionately known as "Sully".
Posted by S. Sydney at 10:20 AM No comments: