Flying By - A Work in Progress

Finally we have made it above the freezing mark! It is 36F (2C) and of course it is raining which has turned my driveway into a skating rink. But I am willing to put up with that to have a nice warmer day even if it continues to be foggy.

I decided to do a little work on this sketch from when I was in Veradero of the beautiful white sand beach, the turquoise water and what beach would be complete without a few seabirds flying through the sky.

I will post this drawing at a later date once I have decided what type of gull or tern I wish to put into the sky.

One of the nice things about being in Veradero besides the diving and beaches of course, was being able to visit the Cuevas de Bellamar, or the Bellamar Caves which is one of the oldest tourist attractions in Cuba and has been open to the public since the 1860s. 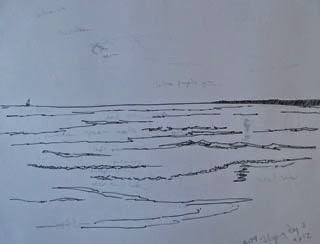 It is located 25 miles (40km) southwest of Veradero near Matanzas city which is approximately 3 miles (4.8km) northeast of the caves which are open from 9am. to 6pm. daily and guided tours are the norm and the tour takes you through just a part of the Bellarnar caves which is sufficiently lit for visitors to enjoy the cave and to prevent tourists from getting lost in the almost 2 mile (3.2km) cave system.

There are a lot of steps leading down into the cave, which is very humid, warm and damp underfoot, with a network of clear streams running throughout but it is well worth the climb back up them when you have to leave this hidden magical world after seeing the many amazing crystalline domes and formations which come in such a wide range of shapes and sizes.

It is known for the multitude of stalagmites and stalactites which are believed to have been formed over 300,000 years ago. The tour will show you the beautiful cave murals left by the indigenous peoples, numerous fossils and the many interesting formations such as La Fuente de La Juventud (The fountain of Youth) and the Galería de Coco Rallado (Grated Coconut Gallery).

One day I will return to Veradero and take a trip to see some of the other caves in the area like The Santa Catalina and The Saturno.

Thank you for taking the time to visit my blog and look at the artwork. I hope you will return often.
Posted by S. Sydney at 6:07 AM No comments: