Last year, Ron noticed that our grandson Aaron was outgrowing his motorized Jeep and probably wouldn't be using it this year. 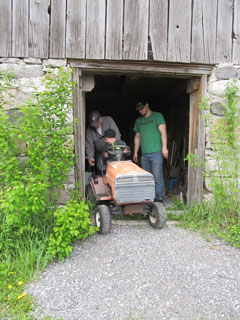 Since we had a small and very old Husqvarna lawn mower on which the deck was no longer working, Ron decided to work on it over the winter to give Aaron a "new ride" for the summer.

He took the rusted, old deck off first and then cleaned up the undercarriage, making sure there were no rough edges that could cause problems.

Next he bolted a steel plate across the speed control so that it could only go forward on the slowest setting. 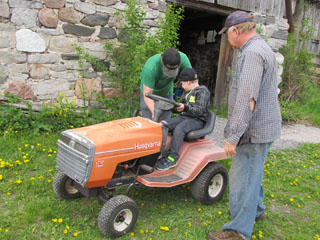 From there he worked on the motor to make sure it was in working order and would start and stay running. 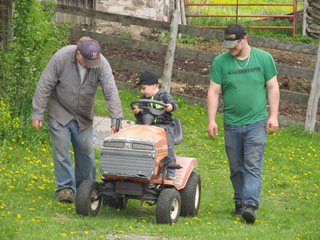 Next he fixed the two flat tires and then it was time to take it for at test drive to make sure there were no unforeseen problems. 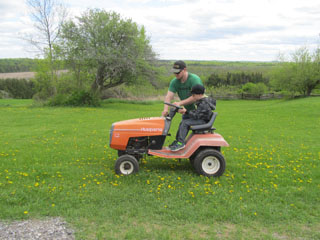 And of course he found that when you got off the seat the kill switch wasn't working and the engine didn't stop running. 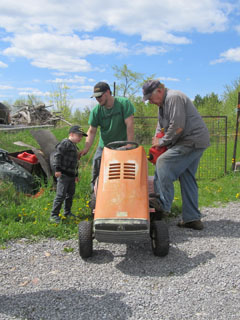 That took a couple of weeks until the part came in so he could fix that and finally get the lawn mower out of the shop and into the west barn stone room with all the other lawn mowers which were waiting for spring.

Finally, today is the day when Ron and Kyle handed the key to Aaron and took him down to the barn so will be able to drive his new "toy".

They showed him where the brake was and then allowed him to start it and he was able to drive it slowly out of the barn for the first time. 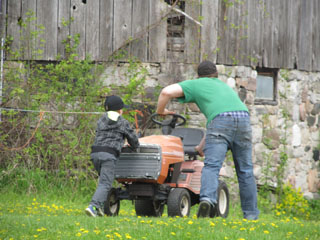 With his father and grandfather on each side of him, they left the barn drive and headed up to the main driveway for his first time of going up and down the driveway. 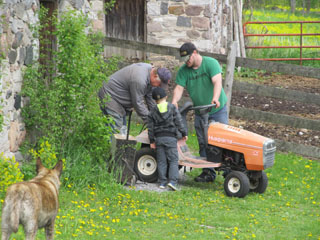 After the first turn up and down the driveway Kyle went with him and left grandpa to relax in the shade watching them. 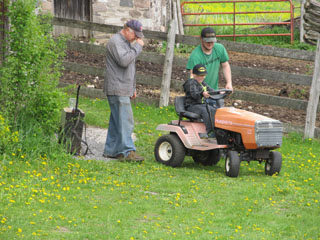 On the way back just before turning around to go again, it ran out of gas so it was time for a pit stop to fill the gas tank. Aaron was standing by, watching them closely to make sure they were doing it right. 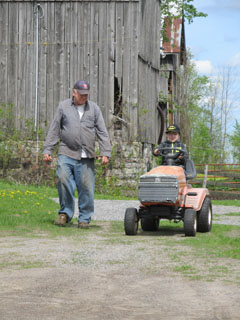 Once it was fueled up they tried to start it again but it just wasn't working.

While grandpa went down to the stone room to get the battery charger out Aaron and Kyle pushed the mower down to the doorway.

Aaron was right there watching how they hooked up the cables onto the battery and asking them questions.

It didn't take very long for the battery to charge enough so it started and Aaron was on his way once more going down the driveway. 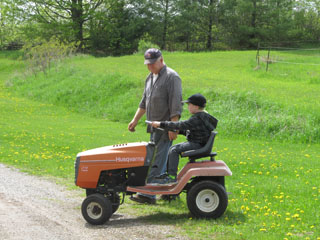 This time it was grandpa's turn to go with Aaron and he asked grandpa if he could drive on the front lawn for a change. 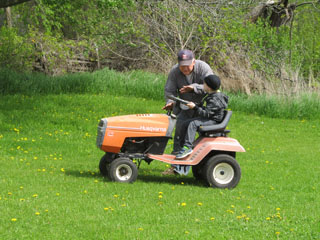 Ron explained to him that when he went down the hill he had to go straight down and not go on an angle, as the hill was steep and he didn't want him to roll the mower over and get himself hurt. 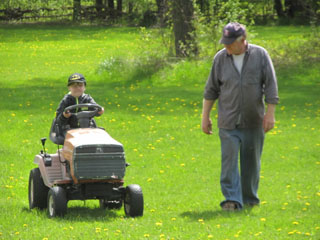 After Aaron safely negotiated the hill and turned a couple of laps around the front lawn they headed up onto the back part of the track and went to the back bend before turning around and coming back. 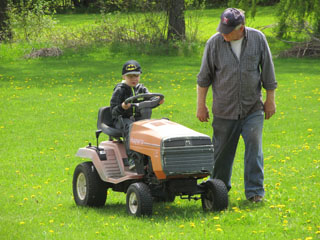 Then one final trip around the front lawn and it was back to the barn. 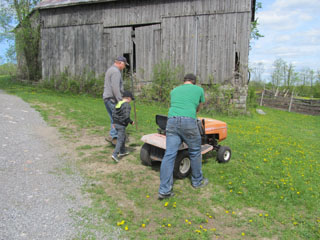 But just before they mad it back to the barn it quit and Kyle pushed it into the west barn stone room.

Grandpa will have sorted the problem with it quitting by the next time Aaron comes up to play with his new toy.
Posted by S. Sydney at 9:35 PM No comments: