I was going through some older photographs and came across pictures that I had taken of  'Church on the Rock' a number of years ago when the Buckhorn Artists' Group had a paint out at Helen's and she took us out in the boat for a tour of the lake.


St. Peter's on-the-Rock Anglican Church is on a small island on Stoney Lake in the Kawartha Lakes tourist area of Ontario.

The Church is open from May to September and this charming place of worship is only accessible by boat.

Once I was satisfied with my drawing of the church I transferred it to my watercolour paper. I then masked out the Church first with white painter's tape rather than liquid frisket as it is all pretty much square shapes and I wanted to draw on the tape where the open door and windows would be so I could match up the reflections in the water. 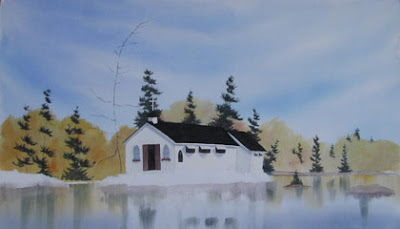 Using French ultramarine blue I washed in the sky and then brushed a slightly darker mixture into the area of water. While the paint was still wet I lifted some of the reflections of the church with a dry brush.

Since the photographs were taken in September the colours on the deciduous trees had started to change. I put them in fairly softly with various mixtures of French ultramarine blue, raw sienna, burnt sienna and alizarin crimson. Using vertical strokes I put their reflections into the water as well.

With a mixture of burnt sienna and a touch of alizarin crimson I painted in the rock reflections and a couple of rocks that were showing above the water. Adding a little French ultramarine blue to the rock mixture I brushed in the window and door reflections.

Mixing up a dark green from French ultramarine blue and raw sienna I placed in the pine tree reflections before the water area could completely dry. With a slightly stronger mixture I indicated some of the pine trees.

I then removed the tape from the church and started a started putting in some of the dark areas like the roof and windows and with a lighter wash started adding the shadows and various details to the building.

I will post this painting at a later date once I have more of it completed.

Thank you for taking the time to visit my blog and look at the artwork.