Setting up in Algonquin Provincial Park

It is another wet and rainy day with the temperatures hovering just above the freezing mark. If it gets a little colder we may end up with the first snow of the season. 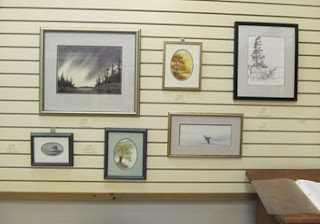 Today I had to go and set up the show at the Visitors' Centre in Algonquin Provincial Park. I am hoping that the fallout from Hurricane Sandy will hold off until I return home. The trip up was relatively easy with no heavy downpours of rain or high winds. 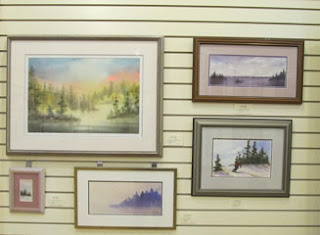 I took 43 paintings with me that I felt would allow me cover my 32 feet (9.75m) of wall space and I hung 30 of them on the four panels that were mine. This allowed me to leave the remaining 13 paintings at the Centre in case some of the paintings sell during the course of the show which runs until 26 June 2013. 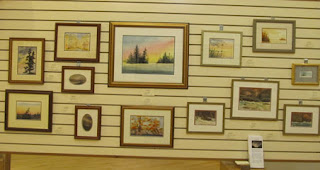 When I was packing up the empty boxes to take back home with me I noticed that the rain had turned to sleet and realized that it could be a nasty trip home depending on whether or not I would run into the high winds and if the sleet iced up the roads. 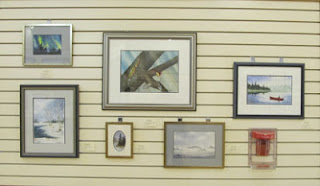 About half an hour into my return trip the sleet and rain stopped and the roads were much nice to drive. It wasn't until I reached Apsley that the rain started again, this time it was a down pour which kept the wipers going continuously, but I was fortunate in that the high winds that were expected never materialized.
Posted by S. Sydney at 10:29 PM No comments: