Today is Saturday and with the weatherman calling for showers later in the day and continuing throughout tomorrow, Ron and I decided to get the yard work done early. 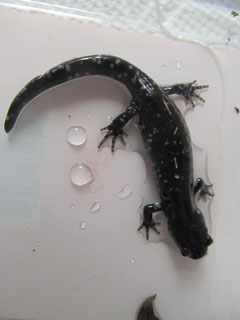 With me doing most of the lawn mowing today Ron decided to clean out the underbrush beneath the willow tree at the front of the property.

It wasn't long before he flagged me down and when I went over to him he handed me a small, seemingly lifeless body of a salamander.

I took it up to the house to see if it was dead or just stunned.

I examined and identified it as a Blue-spotted salamander (Ambystoma laterale). Fortunately, it didn't appear to be crushed or harmed in anyway.

I placed it in a terrarium and added some water and a few leaves which seemed to revive it. 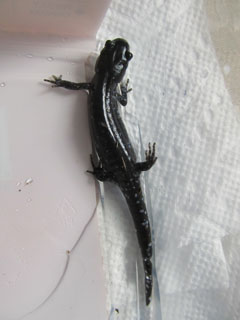 The Blue-spotted salamander is a member of a group of subterranean amphibians known as mole salamanders.

They are native to the Great Lakes area, parts of Ontario, Manitoba and Quebec.

Their range extends as far to the north as James Bay and to south eastern Manitoba in the west.

Adult salamanders measure from 3-5.5” (7.6-14cm) in length and have dark bluish-black skin, with blue flecks on its back and tail, with bluish-white spots on the sides of its body.

These salamanders have large heads with protruding eyes and stocky bodies supported by sturdy limbs, with four long toes long toes on the front feet and five on the hind feet. 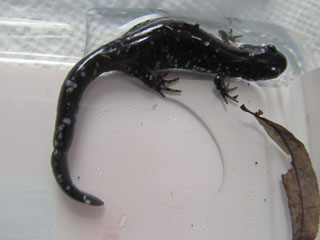 Blue-spotted salamanders usually live in moist, deciduous hardwood forests such as red maple swamps and oak/birch woodlands, although they can also be found in coniferous forests and fields.

They prefer spring pools that retain water into mid-summer, to ensure access to a suitable breeding habitat. The adult is found in mature woods where the ground is littered with rotting logs, underbrush, leaf litter and rocks below which the salamanders dwell within moist depressions or burrows. 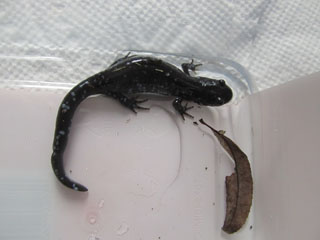 This is why the front of the property is an ideal location for the Blue-spotted salamanders as the area is under water from the early spring when breeding occurs and their eggs are laid in small clutches of about a dozen eggs, attached to twigs, rocks or plants at the edge of a pond and remains wet through to the middle of the summer and remains fairly damp until late summer when the juveniles emerge and disperse to terrestrial locations.

Once the Blue-spotted salamander was moving around in the terrarium without difficulty, I returned him to where Ron found him under the willow tree and heaped some of the partially rotted leaves around him.
Posted by S. Sydney at 12:40 PM No comments: