I pulled this sketch out that I had started last month when we were out canoeing on Lovesick Lake. 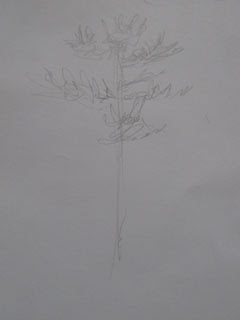 It is one of the many beautiful pine trees that are found in the area on the islands.

Originally I only had enough time before we drifted past to do the top part of the tree and put in a few of the many twisted and broken branches that attracted my attention and gave this lone tree on Beaver Island so much character.

I pulled up my reference photographs and added more of the dead branches to the trunk and will later add more of the areas where needles still clung to the branches. 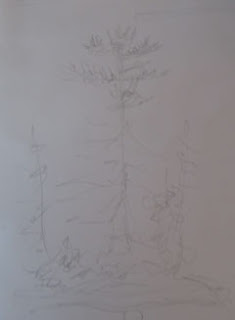 Next I added the two dead tree trunks on either side of this pine that were not able to survive the harsh winter winds.

Then I indicated where few smaller pines were trying to take hold at the base of the trees and in between the crevices in the rocks.

Below the rocks I lightly blocked in where the reflections would appear.

I will post this piece at a later date once I have applied ink to the sketch.

Thank you for taking the time to visit my blog and look at the artwork. I hope you will return often.
Posted by S. Sydney at 8:58 AM No comments: