Shadows I - A Work in Progress

I started applying ink to this sketch of a rock which was partially submerged in the water of the lake close to shore. I wanted the rock to have highlights, shadows and cast shadows.

First I indicated the water with a few horizontal lines and then added the water line to the base of the rock.

Next I started to put in some of the lighter shadows just behind the sunlit area of the rock face. 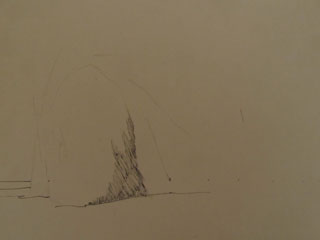 I added the mid tone shadows to the further back rocks, then I darkened the small rock close to the water line.

Going another shade darker I put in the cast shadow from the first rock across the second one and darkened the base close to the water slightly.

After I added a few more waterlines on the other side of the rocks I decided it needed something more to make it interesting. 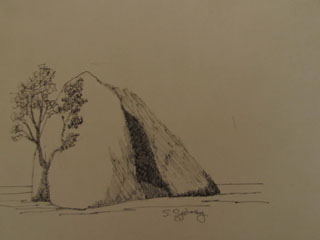 I sketched in a small that is often found growing out of the crevices between the rocks and put in its cast shadow.

Next I inked in the additions on the front of the rock and then set it aside.

I will post this piece again at a later date once it has been completed.
Posted by S. Sydney at 11:18 PM No comments: