Today is the first day of the Lucy Manley workshop at KAGS for the month of February. It had to be postponed for a week due to a snow storm that caused most of the schools in the area to be closed and many of the people in the class have to travel long distances to get to the Gallery.

This painting was started with an under paint of raw sienna to have a layer of warm colour as a base. 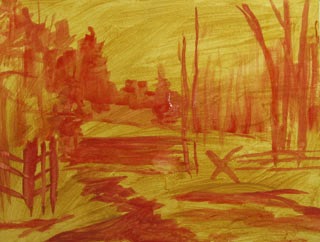 Cadmium yellow was added to the cadmium red for an orange to indicate the trees in the background.

Then the sky was brushed in using pure cadmium yellow as the base colour for a sunset.

A dark was mixed using French ultramarine blue and alizarin crimson this was colour was used to indicate the darkest areas in the trees, the reflections and the foreground. 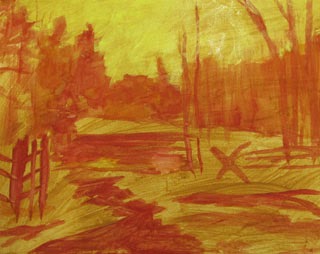 A little white was added to the cadmium red and yellow mix and the high lit tops of the background trees were indicated.

A dark green of French ultramarine blue and raw sienna was used for the middle tone of the cedar trees; a little cadmium yellow was added to the mixture and the sunlit sides of the cedars were painted.

To the orange mix of cadmium red and yellow a small amount of French ultramarine blue was added and vertical lines were put in to indicate the trunks of the distant trees. 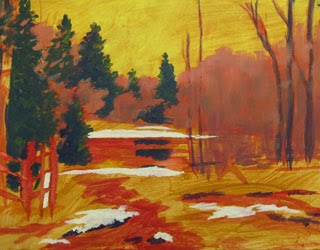 Next Titanium white with a small amount of cadmium yellow added was used to paint the sunlit areas of the snow.

The darkest snow shadows were painted in with a mixture of Titanium white and French ultramarine blue and a touch of alizarin crimson was added to some of the areas to warm the shadows.

Cerulean blue was added to the shadow colour and was painted into a few areas in the foreground. 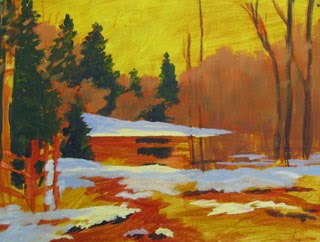 Adding a little more alizarin crimson to the warm snow mixture the ice was painted into the pond leaving a few areas of open water with the reflections showing through.

A little of the ice colour was put into some of the tops of the background trees to indicate frost.

More of the foreground snow was painted in leaving a few areas untouched as though the sun during the day had melted the snow leaving the water covered ground bare. 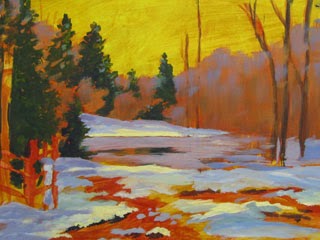 I will post this painting later this month after more work on it has been completed.

Thank you for taking the time to visit my blog and enjoy the artwork.
Posted by S. Sydney at 6:05 AM No comments: