Green Eyes - A Work in Progress

Today is the second part of the Victoria Wallace workshop on grisaille at the Kawartha Artists' Gallery that was started earlier this month (see posting on 07 October 2013). 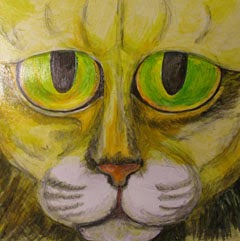 In the first class the image was executed entirely in shades of grey to produce a three dimensional effect; this painting technique was used by 15th century Flemish painters and in the late 18th century imitate sculptures in both wall and ceiling decorations.

It could have been left that way but today it will be used as a monotone under painting for an acrylic painting and we will be glazing layers of translucent acrylic colours over it.

I will post his painting at a later date after more layers of colours have been applied.
Posted by S. Sydney at 2:51 PM No comments: