Even though we have snow flurries and the temperature is 32F (0C) with a wind chill making it feel like 23F (-5C) Ron put up the bat house I received on my birthday from Christine. 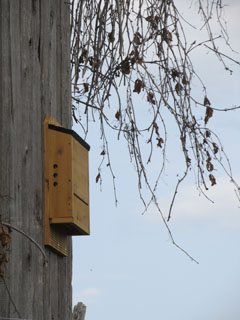 He put it on the south side of the barn, where it is protected from the north wind.

I am hoping that it will become a home for little brown bats (Myotis lucifugus) which are currently listed as an endangered species on the IUCN Red List.

Up until recently, we used to watch a number of them fly at night hunting for insects.

Last year I only saw one on the property, which disappeared toward the end of the summer. 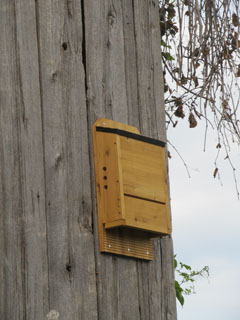 Bats have very few natural predators, some owls and predators like racoons.

Diseases such as rabies may cause death but no more than it would affect any other wild animal species. Many bats are now dying from white-nose syndrome which has been a significant cause of mortality since 2006, killing over two million to date.

In some areas the bat population loss has been extreme, averaging a loss of up to 90%.
Posted by S. Sydney at 11:10 PM No comments: