The next area to be put in is the nose. This acts as a reference for the centre line of the face. 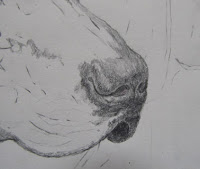 I start by placing a small, light shadow to use as a guide where the bridge of the nose and the top portion of the muzzle meet.

The centre line which divides the two halves of the flat front portion of the nose between the nostrils is put in first and the top edge of the nose pad is darkened. 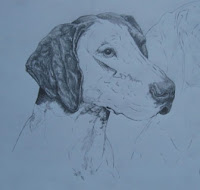 The shadow under the flap of skin below the nostril is put in which gives it its shape.

The lower edge of the upper lip is strengthened and given a more definite shape. The shadow under the lip is darkened to give a little depth.

The area of the muzzle below the nose is given shape and the whisker lines are indicated.

I then start working my way back up the bridge of the nose giving more shape and confirming the existing lines with a soft line of graphite. 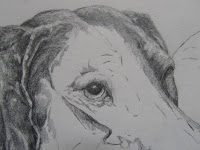 Working with the lines following the curve of the skull I add in shading in front of the ear, gradually building layers of graphite.

The leading edge of the ear flap shows more clearly against the shadows beneath it which seems to push it forward.

The lines on the cheek are put in vertically to indicate the flatness
of the area as opposed to the roundness of the skull. 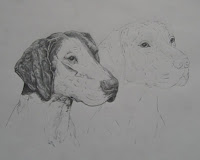 Next I go back and darken the area around the far eye adding in the furrows above the eye and a little more shadow under the far side ear flap.

As you can see so far other than putting the eyes in on the other dog nothing has been done with him, yet.
Posted by S. Sydney at 8:32 AM No comments: