Through the Storm - A Work in Progress

It is the last day of the year and one can look back at everything that has been accomplished; then at the stroke of midnight one can look forward to a bright New Year and what the future may hold. 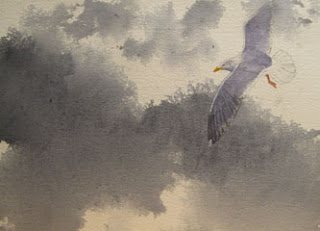 I went in and added some Chinese white to the edges of the gull's wings to make them stand out against the dark storm clouds. I know I will have to go in a number of times to build up the layers of white paint until I have them as bright as I would like.

Next I painted in the details on the gull's head, setting in the beak and adding shading to the head and neck in grey tones of cobalt blue and burnt sienna. 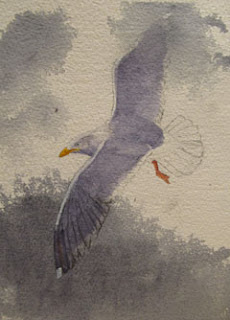 Using the same shadow mixture of cobalt blue and burnt sienna I brushed in the under paint for the back and wings of the gull. Then using a slightly darker mixture I painted in the next layer adding some shape to the back and adding a little definition to the to the wings.

With a dark almost black mixture of French ultramarine blue and burnt sienna I started painting in the individual primary flight feathers on the closest wing.

Thank you for looking at my artwork.
Posted by S. Sydney at 12:43 PM No comments: