While I was still in high school I became interested in the aquatints created by Nicholas Hornyansky and I am fortunate to have been able to purchase a couple of them over the years.

He was born in Budapest, Hungary in 1896 and by the time he was 12 he worked as a colour mixer in his father's printing office.

Hornyansky studied in Budapest at the Academy of Fine Arts and after he graduated he did post graduate studies in Antwerp, Munich, Paris and Vienna and became an accomplished portrait painter.

He later went to Belgium and studied landscape painting in the School of Franz Hens. By then he had held a number of one man shows in Antwerp and Brussels.

He later travelled to England where his portraiture earned him several commissions in London before he went to Paris where he studied colour aquatint printmaking and etching.

Hornyansky immigrated to Canada and settled in Toronto, Ontario in 1929 and became a Canadian citizen in 1934. He remained based in Toronto, but travelled extensively from coast to coast throughout both Canada and the USA. 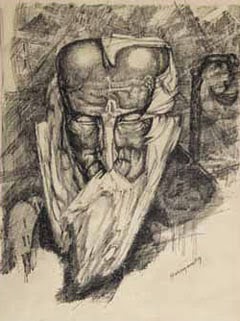 He exhibited regularly with and became a member of the Ontario Society of Artists and the Royal Canadian Academy (1934 elected Associate Member), the Society of Canadian Painters, Etchers and Engravers (1929 elected Member) and the Canadian Society of Graphic Art.

He was a member of many American art associations including the American Color Print Society (Philadelphia), the California Printmakers, the Philadelphia Society of Etchers and was also a Life Fellow of the International institute of Arts and Letters.

He exhibited widely throughout North America and internationally; and received numerous awards for his work becoming recognized as an award winning Canadian artist and printmaker.

Nicholas Hornyansky made major contributions to the advancement of printmaking in Canada and he taught metal plate media at the Ontario College of Arts from 1945 to 1958.

He also developed a very unique style of his own using a single pull, positive approach aquatint process.

Hornyansky is best known for his colourful aquatint etchings, which cannot be mistaken for the works of any other artist, are of the rural scenery, historic sites and the architecture of Ontario, Quebec and the Maritimes and are unmatched anywhere in North America. 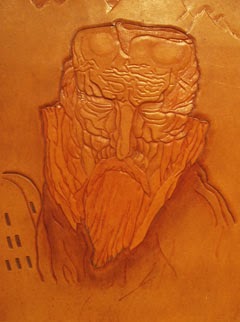 Hornyansky’s works are represented in many major public collections throughout the world, including the Royal Ontario Museum, the National Gallery of Canada, the Musée Plantyn in Antwerp, the National Print Collection at the Library of Congress, the New Mexico Museum of Art in Santa Fe and the Pennsylvania Museum of Art, in USA, etc.

This 10" x 14" carved leather image is my attempt at reproducing Moses created by Nicholas Hornyansky.

Thank you for coming to look at my artwork.
Posted by S. Sydney at 10:06 PM No comments: