Today is the second day of the Watercolour Class I am teaching at the Kawartha Artists' Gallery and Studio. 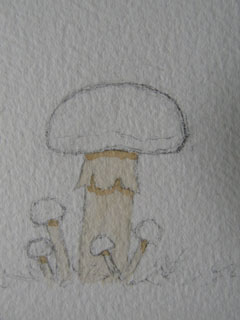 Some of my students wanted to do fairies and mushrooms in a painting.

I did a few sketches of mushroom silhouettes on tracing paper and had them transfer the various mushrooms they wanted to use onto their paper.

While they were doing that I did a couple of sketches of fairies for them.

Once they were pleased with the placement of the mushrooms they were able to transfer the fairies they liked onto the watercolour paper among the mushrooms. 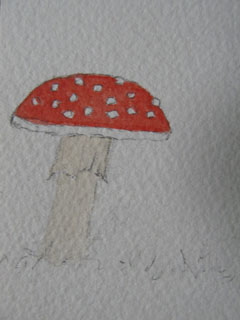 I liked the idea of doing painting some brightly coloured toadstools and did three small drawings of the Fly Agaric mushroom (Amanita muscaria).

The name Fly Agaric comes from the traditional use for this mushroom in medieval times when it was ground up, placed in a jar and used as an insecticide.

The Fly Agaric is a large mushroom, which when fully grown the caps are usually around 3-8" (7.6-50.8cm) in diameter, although larger specimens have been found. It is easily identified by its rich, deep red coloured cap with its contrasting bright white scales. This bright colouration serves as a warning that it can be harmful and should not be eaten. 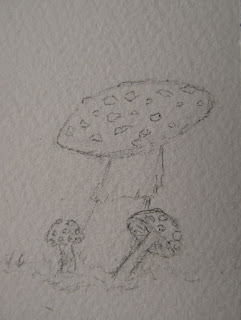 Although classified as poisonous, reports of human deaths resulting from its ingestion in recent times are extremely rare and it is known for its hallucinogenic properties.

But with that being said, it does belong to the Amanita family which contains a number of highly poisonous toadstools.

Some of which are its close relatives the Destroying Angel (Amanita bisporigera) and the Death Cap (Amanita phalloides) which are responsible for the majority of deaths due to mushroom poisoning.

I will post each of these paintings at a later date as more work on them has been completed.
Posted by S. Sydney at 7:38 AM No comments: