Today I worked on this sketch that I did a couple of years ago (see post on 24 August 2015) of one of the islands as seen from Quarry Bay Beach on Upper Stoney Lake.

I liked the way the wind had bent the tops of the large pine trees on the island. Some of the tops had broken off and the new branches are also bent due to the wind.

After the pines had been inked in I put in the rocks of the island, added some of the large cracks in the stone and started on some of the shading. 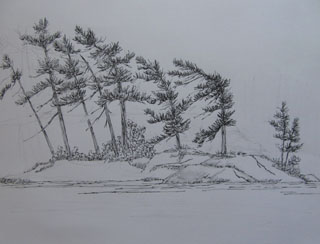 I added in some of the smaller trees and bushes on top of the rocks as well as some grasses and growies.

Next I started putting in the water below the rocks and will add more reflections.

I will post this drawing at a later date once it has been completed.

Thank you for coming to look at my artwork and I hope you will return often.
Posted by S. Sydney at 5:09 PM No comments: