After lightly sketching in areas of dark shadow and the highlights as well as the centre line on the bridge of the nose I began adding the shading to the lower part of the head. 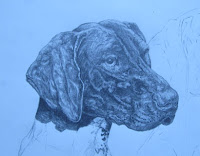 The painting was working so well I lost track of time and forgot to stop and take photographs after I had finished the jaws, bridge of the nose and muzzle. I will try and make sure I stop to take the photographs when working on the other dog's head.

I still have to put all the markings on this dog, but I will do that later.
Posted by S. Sydney at 3:23 AM No comments: