It is another hot 88F (31C) and humid 95F (35C) day and they are calling for thunderstorms for this evening and overnight, but I don't think that is going to happen as the clouds are just not forming the right way for a thunderstorm.

After looking at this drawing I decided that I would like to make it a little larger in size and since there was plenty of blank paper I developed the land in the background by adding a cottage, a boat dock, trees and a pathway.

I started on the background trees behind the cottage which had the added benefit of outlining the edges of the building.

Next I went in and put in the cottage into the background, then added the grasses along the pathway down to the dock.

I put in the water and reflections below the dock and along the distant shoreline. Lastly I put in a few rocks at the edge of the water. 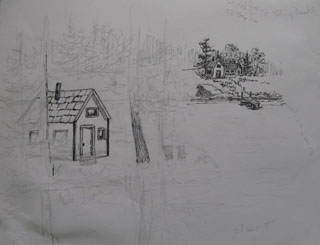 Before I started on the foreground cottage, I lightly indicated where the large tree on the left would be placed, as it is in front of the cottage.

I put in the front edges of the cottage, then the fascia boards. Next I indicated where the door and windows would be placed and then I added the shadow on the wall caused by the edge of the roof and the reflected light in the windows.

Then I started on the roof by putting in the chimney first, adding the roof line and finally putting on the shingles.

Next I started working on the larger tree trunks on the island, but ran out of time before I could get them finished.

I will post this drawing at a later date when I may also extend the foreground out a little more and put a fire pit in front of the Kawartha chairs.
Posted by S. Sydney at 7:36 AM No comments: