Today I was going through some photographs of the area around Burleigh Falls, with its dark water contrasting against the pink granite rocks that grace the shoreline and did this little sketch of Burleigh Bay.

I think it is a shame that the shoreline in Burleigh Bay is going to be filled in and developed into expensive homes and destroy the habitat of the Blanding's turtle (Emys blandingii or Emydoidea blandingii) which is on IUCN (Internation Union for Conservation of Nature) Red List as either a threatened or an endangered species throughout Canada. 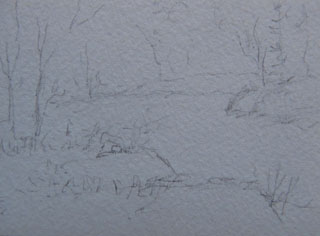 Hopefully the groups fighting against the development and destruction of the marshland and save the  spawning areas for a wide variety of fish species and the habitat to prevent other animals species from going the way of the dodo bird - never to be seen again.

Thank you for taking the time to visit my blog and enjoy the artwork.
Posted by S. Sydney at 7:51 PM No comments: