Rock Shadows - A Work in Progress

The birch trees and the top of the rocks were masked out.

Once the background had dried the masking was removed.

A wash of French ultramarine blue was placed just under the topmost edge of the rocks leaving them white for the sunlit highlights. More water was added to the blue wash and was brushed into a few places on the white birches. 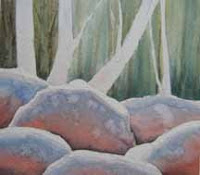 While the blue was still wet a mixture of burnt sienna and alizarin crimson was placed just under the blue and in some places overlapping it. More water was added the "pink" mixture and it was added to the birch trunks randomly.

Burnt sienna and French ultramarine blue were mixed together and a little shadow was put into the base of the rocks. Salt was then sprinkled into the rocks.

While the salt was working trees were put into the background behind the birches to create a forest.

I will post this painting at a later date once more has been finished.
Posted by S. Sydney at 2:44 AM No comments: