Today at the Knoepfli Inn, the sun tried to come out from behind the clouds and while the rain had stopped for the most part there were a few mild showers on and off during the day. 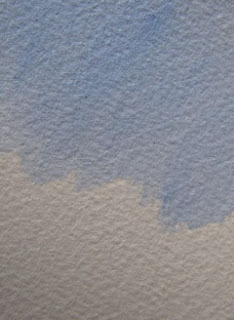 It seemed as though overnight more of the leaves on the trees had changed colour, which was wonderful to see although there were not as many of the brilliant reds that we had seen in the previous years.

I decided that I was going to set myself up on the porch of the farmhouse which is across the road from the Inn and paint some of the trees along the road.

It didn't take long for me to set my paints up  on a bench by an open window. 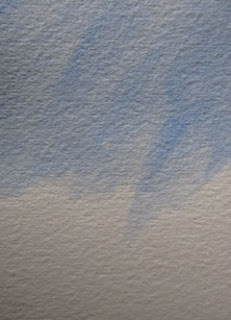 As usual before I could settle down to paint I walked around the property taking photographs of the buildings surrounding the farmhouse including both of the small cottages and the main boathouse.

Once I entered the building again, I was enchanted by the curved windows and doors of the building and took photographs of the interior.

I am sure that I will be using many of them at a later date for other paintings. 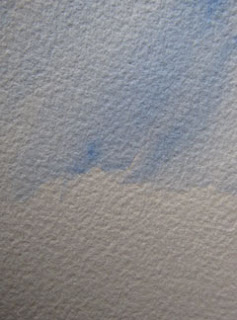 For the first one I painted in the entire paper as sky using various mixtures of French ultramarine blue and cobalt blue with a touch of burnt sienna to grey the colour slightly before I set it aside to dry.

I started a number of other paintings using the same sky colours in a vertical format only painting the top half as sky.

By the time I had put the sky into the fifth painting, the sky on the first one was dry and I could start laying in the under paint. 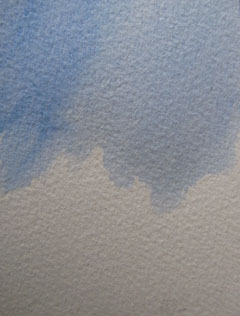 Using a mixture of Antwerp blue and raw sienna I put in the topmost green leaves that were still left on some of the trees.

I added a little French ultramarine blue to the green mixture and put in some of the slightly darker green leaves that were in shadow and then added the growies down near the bottom of the trees with a darker mix of the colours.

I added a little burnt sienna to the darker green and painted in the shadowed areas beneath the trees and the dark ground. 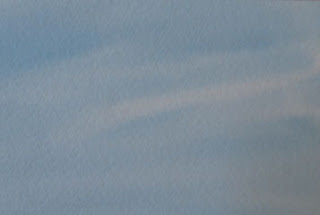 Next using various mixtures of cadmium yellow and raw sienna I put in the leaves that had changed near the tops of some of the trees. 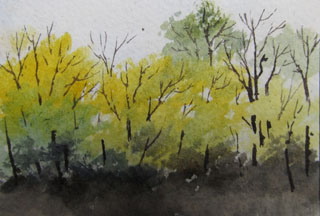 Using a dark mixture of French ultramarine blue, burnt sienna and alizarin crimson I painted in some of the main branches and the trunks of the trees being careful to leave some of them covered by the leaves.

I will post each of these paintings at a later date as more work on them has been completed.
Posted by S. Sydney at 6:13 PM No comments: