Today the theme for the Still Life class at the Kawartha Artists" Gallery and Studio was Lamps and Clocks. But with the temperature setting record breaking low temperatures (in the morning 1F (-17C) with the wind chill at -9F (-23C) and with the wind dying down in the afternoon it warmed up to 16F (-9C)) for the season, not many people came out for the class.

We had a large section of lanterns and not one clock, so to make the display interesting we added a number of art books and placed a pair of reading glasses on an open book.

We placed a wooden chair beside the table, added a pillow and draped a fringed shawl over the back of the chair. The finishing touch was a tea cup on the table by the chair. 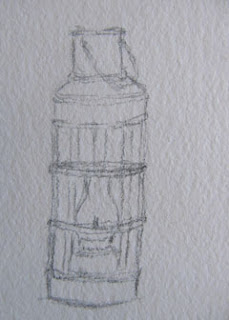 For my first drawing I chose a tall antique copper hurricane lantern that I found interesting with the outer glass chimney held in place with five vertical copper slats and two rounded thick copper wires welded into place on one of the slats.

The cap at the top of the outer part of the lantern had the same copper wire that was used in the banding around the outer glass for a handle.

The lid at the top of the cap opens to allow the egress of air but would also protect the flame from high winds and also allows the candle to be lit.

The interesting thing about this lantern is that it is also has a dead-flame lamp inside and the base at the bottom of the lantern opens to allow the dead-flame lamp to be removed.

Dead-flame lamps have a (fuel tank) can be filled with either oil or kerosene that attaches to wick holding lamp burner which holds the glass chimney with four prongs. The airflow to the wick is controlled through the burner vents and the open chimney.

I will post the other lamp I started at a later date.
Posted by S. Sydney at 5:33 PM No comments: