Last Day of the Shades of Summer Art Show and Sale

I started by inking in the small apple tree and then began working on the marking on some of the birch trees, but couldn't really get into to doing them.

So I moved on and started working on the old hay barn and put in the roof and some of the barn boards.

I will post this drawing at a later date once I have the barn completed. 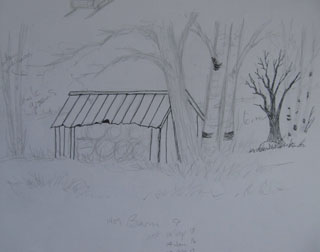 Hopefully some of you will make it out to see the show before it closes.
Posted by S. Sydney at 11:15 PM No comments: