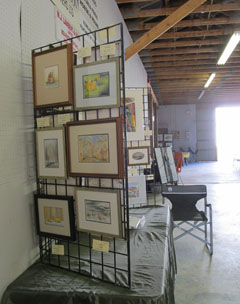 Yesterday my daughter, Christine came with me to help set up my show the Kawartha Arts Festival in Fenelon Falls, Ontario.

Since I am still not able to lift the grids, carry the tables or the boxes of paintings, much less climb up and down a ladder all of which are necessary to set up my display; and I really appreciated all her help.

Once everything was brought in the first thing set up was the table, which I was able to cover with the table cloth while Christine assembled the grids. 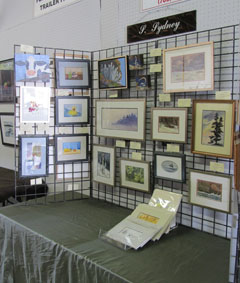 She put them up on the table and I held them steady while she joined the center panels together.

As I unwrapped the various paintings Christine set them out where she thought they should be placed.

And for the most part she was right, so I let her do the hanging.

I helped her with the ones going up on the wall and when she had problems with the hooks on the grids. 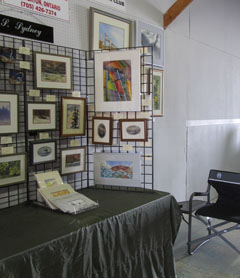 In between times I put the shrink wraps into the rack on the table, put the empty boxes under the table and set up my chair where it would be for the duration of the show.

When I arrived today all I had left to do was put out the brochures and other information on the table and set myself up to work on paintings.

The weather for the show couldn't have been better 70F (21C) bright and sunny with a mild breeze. 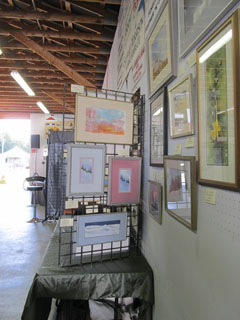 From the opening of the show we had a steady stream of people coming through the building to view the various exhibits and speak with the artists.

As I put away my sketches at the end of the day, I realized that I had worked a little on each of four different drawings which I will post at a later date once each of them are completed.

I am already looking forward to returning tomorrow for the last day of the exhibit. 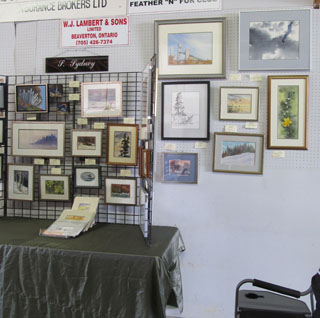 I would like to thank new collector Ms. Signy Franklin, of Toronto, Ontario on her purchase of Rising Mist (see post on 19 March 2010). 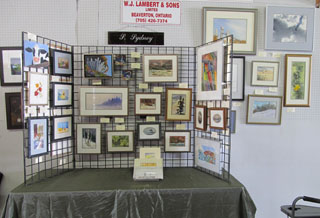