Green Eyes - A Work in Progress

Victoria Wallace taught a class in grisaille painting with at twist at the Kawartha Artists' Gallery and Studio.

We were shown the artistic technique used by the old Masters of painting Grisaille (an under painting in shades of grey) with the modern twist of using acrylic medium with charcoal, markers and/or graphite to create the grey base. 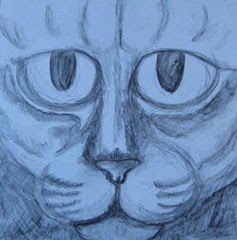 The image was drawn on the canvas in my case with charcoal and the acrylic mat medium was used to spread the grey colour and blend it on the canvas for the light and dark grey values.

I will probably start another two paintings of cat's eyes using some of the other grisaille shades. Paintings where green is used as the base colour are often referred to as verdaille and those that use a brown base are often called brunaille.

I will post this painting at a later date as more of it is completed.
Posted by S. Sydney at 10:24 PM No comments: