Today I was at St. John the Baptist Anglican Church in Lakefield giving a class on painting skies to the Lakefield Creative Arts Group.

They wanted to learn to paint skies at different times of day and clouds formations.

To make it easier for the class I decided to use a limited palette of French ultramarine blue, raw sienna and burnt sienna for the first painting of a sunset.

The sky and water would be painted wet on wet. 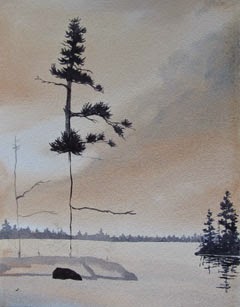 Each student first mixed a puddle of the three colours on their palette and then the paper was thoroughly wet with water. Once the glow had left the paper pure raw sienna was swept into the sky area leaving some sections of white paper.

A thin line of white paper was left to indicate the horizon line.

The water of the lake was put in with horizontal strokes to make it appear to be a flat surface.

Burnt sienna was used next and brushed into the sky in various areas and allowed to mix with the raw sienna creating a subtle orange glow in the sky. This colour was also painted into the water, again using horizontal strokes.

Finally, French ultramarine blue with a touch of burnt sienna were brushed into the still wet sky and water. It was set aside to dry. 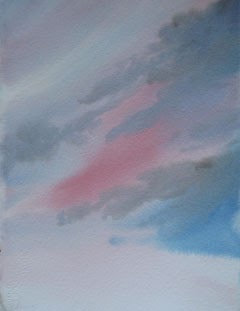 The colours were prepared in the same way as the first painting, with the exception that the French ultramarine blue and burnt sienna were premixed for a warm grey,

Once again painting wet on wet Antwerp blue was applied to the paper leaving the bottom of the paper white for the snow and some areas of the sky white for the other colours.

Next alizarin crimson was brushed into the sky and a pale wash was put into the snow area with slightly curved lines to give the snow covered hill a little shape.

Lastly the grey clouds were put into the sky covering some of the pinks and blues already applied to the sky. This painting was also set aside to dry. 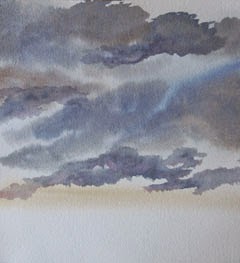 The last painting was to be mainly of clouds. For this one we wanted a little more control over the colour as it was applied so the paper wasn't wet as much as for the first two pieces.

Only three colours used for the sky, they were French ultramarine blue, burnt sienna and raw sienna.

The paper was lightly wet and the horizon line washed in using pure raw sienna.

The clouds layers were brushed in using the different mixes, keeping some areas of the paper white and allowing the colours to blend on the paper as well. This painting was then set aside to dry.

After the lunch break. We started again on the sunset painting by lightly sketching in with pencil the distant island and the closer island, rocks and trees.

Using a mix of French ultramarine blue, burnt sienna and alizarin crimson to create a warm dark black the far shoreline was painted in first without a lot of detail.

Next with a little more detail the distant island was painted in and reflections were painted into the water below the island.

Work was started on the closer island before we ran out of time. I will post the continuing progress of each of these three paintings at a later date.
Posted by S. Sydney at 5:02 PM No comments: