Hoturo - A Work in Progress

It is another day of snow, but the temperature was milder in the morning at 16F (8.9C) and not very much wind; but as the day progressed the wind started up and the temperature dropped to 6F (-14.4C) and with the wind chill it felt like -11F (-23.9C). 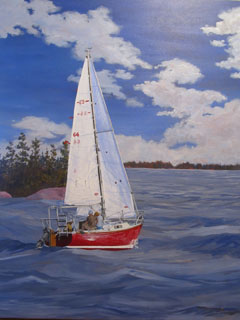 The major one was that the bow was at too low an angle and it had to be changed before I could add the splashing water by the bow.

The other two were much more minor in that the spreader was too dark and a little too thick.

Lastly the pipe on the deck was also much too thick as well.

Once these changes were made I started to by adding the red area below the white line with a mixture of alizarin crimson and cadmium red.

I added a little of the water splashing up from the bow with titanium white.

Now I will start painting the many pieces of equipment that are on the front of the boat. 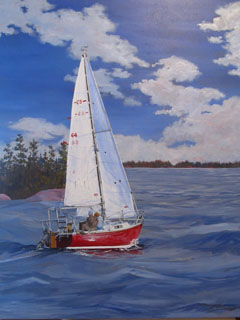 First I increased the height of the stanchion on the top of the cabin. Then I added the base and the housing for the lines running to the spreader bars on the mast.

Next I cleaned up the white areas on the deck then added ultramarine blue and burnt sienna to the paint and put in the details on the window and curtains.

With various mixtures of white, blue grey, and black I painted the bow pulpit (the guardrail and support on the bow for the lifelines).

Now I can add the stem fitting (the fitting at the bow where the forestay is fastened).

With a grey mix I added in the spring line (a dock line usually used to prevent fore and aft motion of the boat).

I added the cleat (a metal object to which various lines  can be fastened) onto the deck with white paint and then added the lower part of one of the spreader lines before adding a little ultramarine blue to take it the rest of the way to the spreader.

Using the pale blue paint I put in the second line for the spreader, ran the lifelines, and the rigging line shadows on the foresail including the shadow of the far side of the bow pulpit and lastly the shadows cast on the deck.

Using a dark mix of ultramarine blue, burnt sienna and alizarin crimson I put in the dark part of the waves from the bow to the stern. 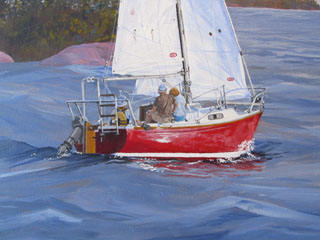 With a thin mix of cadmium red and alizarin crimson I added some of the reflection of the boat into the water.

I will post this painting again at a later date once I add the reflection of the sails into the water.

Thank you for taking the time to look at my artwork and I hope you will return often.
Posted by S. Sydney at 7:37 PM No comments: