My friend Joanne to celebrate the anniversary of her mother's death had gotten a tattoo written in Sanskrit for the fifth level of yoga Anandamaya Kosha (the spiritual body).

After living with it on her arm for a while she decided that it was a little on the plain side and sort of looked like a bar code and wanted to add something more to it and some colour as well.

Over lunch a couple of months ago we discussed a number of different options to create something that she would be happy with having on her arm.

She liked the idea of having different kinds of birds flying around it, birds flying out from a feather, floral themes and I did a number of sketches. 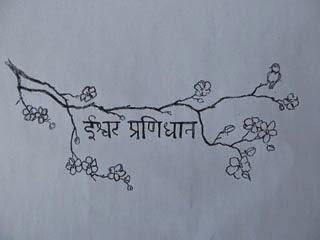 After going through various birds, hawks, ravens, pigeons she finally decided on having her favourite bird the chickadee.

She wanted something delicate, that wasn't over powering. With it being spring I thought she may like a combination of apple blossoms surrounding the lettering and adding a small chickadee.

She is going to have the design stenciled onto her arm and live with it for a week or so to see if it is exactly right for her.

I will do up a colour one and post it at a later date once I know what she decides about this image.
Posted by S. Sydney at 8:56 AM No comments: