I had planned on going painting today with the KAGS Outdoor Painters' Group to the Miskwaa Art Studio and Outdoor Gallery in Trent Lakes, Ontario. But unforatunately, we ended up having rain most of the day with the chance of a thunderstorm, due to the continuing heat 86F (30C) and high humidity 102F (39C).

I started by putting in more of the background trees and then adding the outline of the tops of the main rock masses. 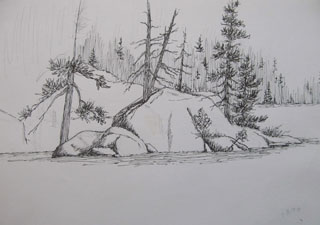 Next I put in some of the larger dead tree trunks and then, added in a few of the grasses and growies among the rocks.

On the foreground island I started adding in some of the crevices and shadows on the rocks before starting on the trunk and lower branches of the largest pine tree.

I will post this drawing at a later date once the drawing has been completed.

Thank you for looking at my artwork.
Posted by S. Sydney at 9:43 PM No comments: