Northern Lights - A Work in Progress

Around 3:30 a.m. this morning Kyora woke me up due to the sound of thunder in the distance as the storm was approaching. Normally thunder storms do not bother her, but by her actions I knew that it would be a major storm.

It certainly came in with a vengeance, the rain started and got harder as the storm came closer until we had this tremendous thunderstorm right over the house. The sky lit up and in less than a second the booming thunder clapped over the house causing the windows to rattle.

Since I enjoy a thunderstorm I sat out on the front porch for most of it, but for the better part of almost an hour you couldn't see the lightning,  just a flash as the sky light up and the crash of the thunder overhead.

It wasn't until around 5:00 a.m. that I could finally see the lightning and the rain gradually started to slow down. The storm finally abated around 5:45 a.m. when it moved out of the area.

Usually, after a major storm like this one you can expect the temperature and humidity to drop; but that didn't happen with this one as it remained hot 86F (30C) and muggy with the humidity at 100F (38C). 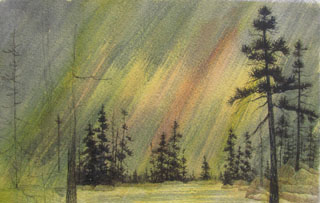 One benefit of the storm was with all the rain we had, the grass was no longer crunchy when I took the dog out for her walk.

Using a dark of alizarin crimson, burnt sienna and French ultramarine blue I started by putting in an indication of the tree trunk on the furthest left side of the painting.

Next I started with the closest tree on the left side beside the finished area of the painting on the right. Once again starting with a line indicating the trunk before proceeding with applying the bark onto the tree trunk beginning at the bottom and working my way up toward the top of the tree.

It wasn't long before I decided to stop before I made a mess of the painting due to being tired.

I will post this painting at a later date once more of the trees on this have been completed.

Thank you for taking the time to visit my blog and enjoy the artwork. I hope you will return often.
Posted by S. Sydney at 7:29 AM No comments: