Today I had to go into KAGS to open the studio for the still life class. The theme was metals and we had two wonderful displays.

Carol and I were the first to arrive and we set up a large display featuring items that were made of brass, copper or silver on the large table in the centre of the room.

The rest of the group arrived later and what they brought in was set up on a smaller table which featured things made of either silver or brass.

I decided I would do a separate drawing featuring each of the different kinds of metal. I chose copper as the first metal and used a pitcher, a tall vase and a kettle from the display. 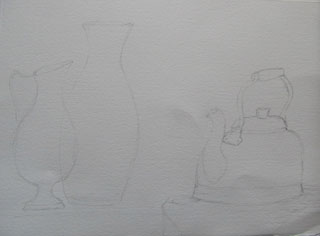 I liked the shape of the pitcher and started by placing it on the left side of the drawing first. This was followed by my putting the tall copper vase slightly behind and to the right of the pitcher.

On the right side of the drawing I put in the copper kettle which was a heavy enough piece that would balance the height of the two pieces on the left side.

Next I added the draping and some of the folds of the cloth beneath the kettle and the other copper pieces.

I will post the one in brass and the one using silver at a later date.
Posted by S. Sydney at 4:52 PM No comments: