Big Cedar Lake I - A Work in Progress

I was going through the various sketches I did while out in the canoe over the last couple of years; and decided that I would like to work on this one that I started last year (see post on 23 August 2015).

Using vertical lines I put in the distant trees behind the rocks and then I added a few pine trees on top and lastly I put the shadows onto the rocks.

In the middle area I put in the rock close to the shore and blocked in the outline of the boathouse.

Next I started on the foreground island by putting in the rocks. 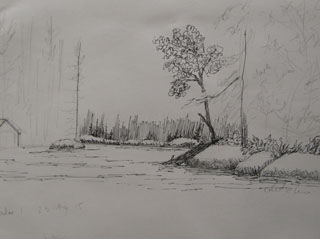 I put the maple tree trunk and branches on the end of the island and then gradually added the leaves onto the branches.

On top of the rocks I put in the small bushes and growies followed by the fallen tree trunk on the end of the island.

Next I put in the ripples in the water and the reflections from the rocks.

Then I started to put in the pine tree trunk, but ran out of time when my friends arrived and I had to leave.

I will post this drawing at a later time when more work on it has been completed.
Posted by S. Sydney at 9:14 PM No comments: