The Park has three day use beach areas; Dunes Beach, Lakeshore Beach and Outlet Beach which are very popular. All three have sandy unsupervised (no lifeguards) beaches, with six emergency phones located at the base of the white flagpoles. 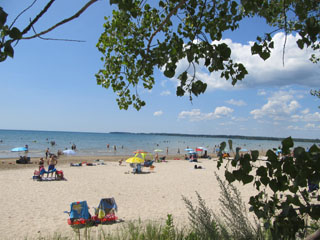 We were fortunate after we arrived and got our day passes at the Main Gate to find parking spots in parking area 11 which was close to Outlet Beach.

Once we had everything on the beach and set up, with some of the chairs on the beach in the sun and others set up in the shade under the trees, Aaron, Christine, Kyle and Ron went for a walk along the beach while I decided to relax, take some photographs and do a couple of sketches. 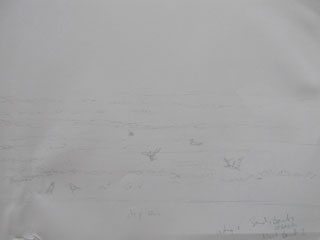 My fist sketch was of some of the many gulls standing on the beach, flying in to land in the water and those that were either wading or swimming in a small shoal close to shore. 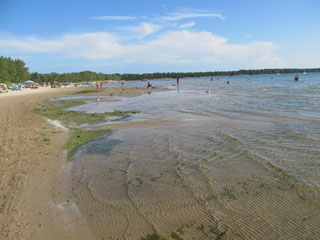 It wasn't long before everyone returned from their walk along the beach and it was time for us to go into Lake Ontario for a swim.

With the water being so shallow and the high temperatures we have been having for the last couple of months it wasn't surprising to find that the water was fairly warm. 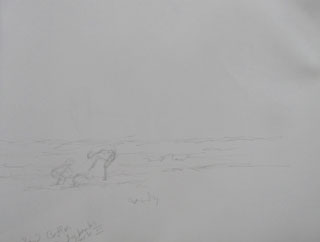 We spent a lot of time splashing around in the water, and Aaron who is just learning how to swim didn't want to come out of the water. So we took turns, so that there were always two of us that stayed in the water with him until he was ready to have lunch. 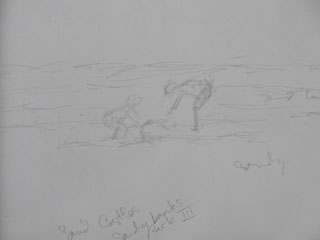 After lunch, Ron and Aaron decided that they would build a sand castle, complete with a moat that Aaron filled with pails of water from the lake. While they were doing this I did a quick sketch of them building the castle. 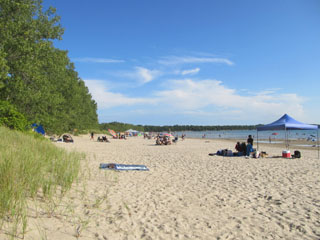 While they were busy with the castle, Kyle and Christine took a stroll to the other end of the beach collecting some of the small shells that had been washed up on shore.

I occupied myself by sketching the various beach chairs, towels, coolers and beach bags that were found on the beach. 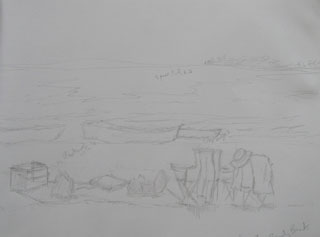 In the meantime a couple of paddle boats pulled up on the beach and the boats were left at the edge of the water, so I decided to add them into the background of my sketch. 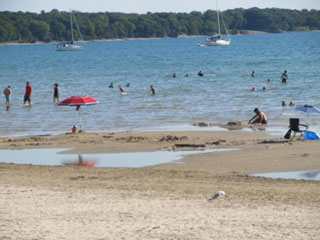 From there I started doing a couple more small sketches of the beach umbrellas, chairs and the gulls which hovered around them hoping for a hand out.

I also tried to capture some of the areas of colour that were reflected into the water from the many brightly coloured umbrellas, chairs and towels. 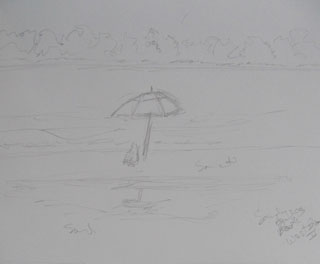 In one of the sketches I was looking toward East Lake and put in the far shore where Outlet Beach and the Cedars Campground are located. 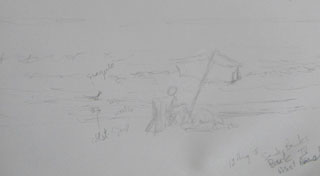 Most of the other sketches are looking out over Lake Ontario with little to no land showing on the horizon line. 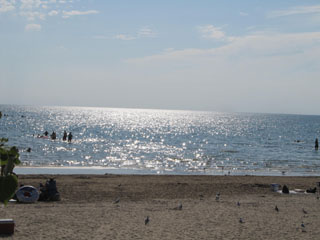 Time passed swiftly, which is usual when you are having fun and it was soon time to pack our stuff back to the vehicles and then go to the Currach's Park Store and Restaurant for supper before we headed home.

I am sure that we will return here again.
Posted by S. Sydney at 2:01 PM No comments: