Sunset Lake 1 - A Work in Progrerss

With the morning temperatures starting off at 9F (-13C) and the wind chill making it feel like -8F (-22C) I didn't envy Christine doing the barn chores.

While looking out the patio doors in the living room, I was pleased to see my North American Kestrels for the first time this year. It is nice to know that they will once again be nesting in the box we made and put on the south side of the house for them.

I wanted to do some painting and pulled out this one that I had started a couple of years ago (see post on 27 April 2015), and drew in an island into the foreground with a few pine trees. 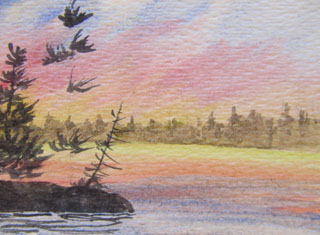 Next I used a mix of burnt sienna and new gamboge and painted the trees along the horizon line on the far shore.

I mixed a dark grey using French ultramarine blue, alizarin crimson and burnt sienna and painted in the rocks of the island followed by the reflections into the water beneath them.

As I was starting to paint the pine trees onto the island in the foreground some of my friends dropped by to see how I was doing and we had an enjoyable time discussing various places the outdoor painters could visit for their paint outs later this year.

Once my company left I didn't have a lot of time to do any work on this painting, so I put it away and will post it at a later date once it has been completed.
Posted by S. Sydney at 3:32 PM No comments: